I bet that after long, hard day you want nothing more than to…

Roll out a mat and sleep on the floor?

Different customs around the world can seem very strange – and one of the biggest is how Japanese people sleep on the floor.

I’ve often been curious about this myself, so I dove in and found out why. Everything I found is outlined below, but if you want a short answer..

Why do Japanese People Sleep on the Floor?

There’s a bunch of reasons why Japanese People Sleep on the Floor. Including tradition, space-saving in small homes, and customising for summer/winter, and more. Sleeping on the floor has been custom in Japan for thousands of years, though this is slowly fading.

That’s the quick version – but in truth there’s no ‘one’ reason why Japanese people sleep on the floor. Instead, there’s plenty! I’ve covered them all below. (And also covered some of the disadvantages at the end… it’s not all sunshine and rainbows down on the floor!)

When you think about it, the whole world must have slept on the floor at some point. We didn’t always have the large raised beds that we all enjoy now.

Respecting tradition in Japan is a massive deal. While they’re some of the fastest innovators with technology, they never forget their roots, either. 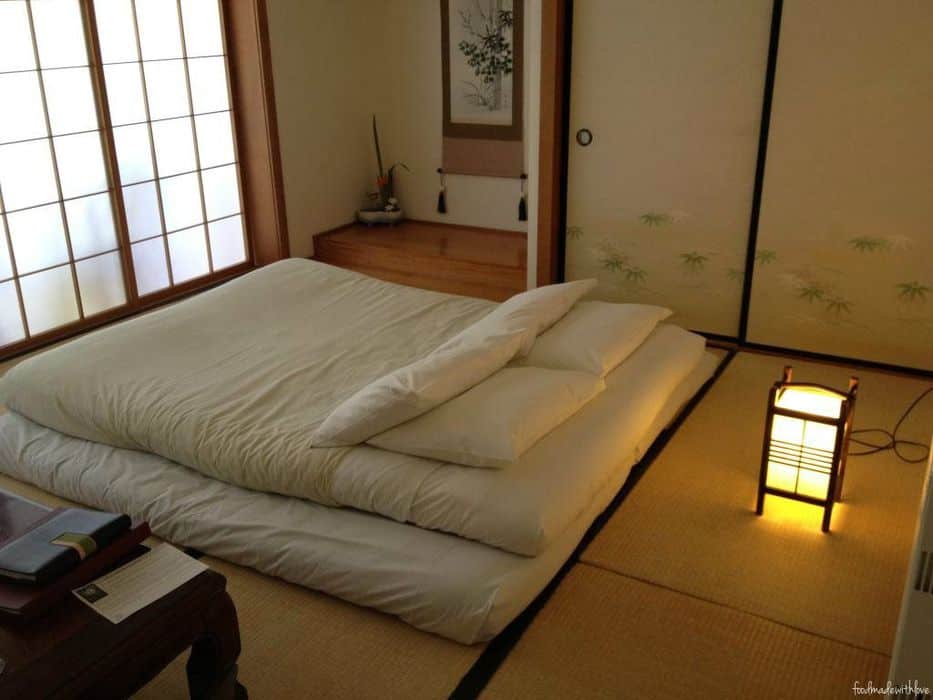 The Japanese way of sleep has been perfected over thousands of years, and is simply a custom of their culture.

While a minority are adopting western-style raised beds (this is even an option in some non-tourist hotels), sleeping on the floor doesn’t look to be changing anytime soon.

When I mentioned tradition – sleeping on the floor isn’t the only thing that holds true for Japanese people.

Even their flooring hasn’t changed in thousands of years. They use what are called tatami mats – soft mats used instead of carpets. Traditionally made from fresh cut straw which changed color as it ages.

One issue with this flooring is that it can’t really handle heavy furniture like a large four-poster bed. Instead, Japanese often opt for light, easy-to-move furniture pieces.

As one of the world’s densest countries by population, space is a rare commodity in Japan. Especially in their larger cities it’s not uncommon to see small apartments without bedrooms.

Instead, it makes much more sense to store their sleeping furniture until they need it.

It’s sort of like the Eastern equivalent of our pull-out beds.

Sleeping futons are often stored in the closet during the day to save space, and then set out every night before going to sleep. It’s brings a whole new meaning to ‘making your bed’.

Adapting to the Season

A great trick is that the Japanese often change their futon depending on the season.

Unlike in the west where we are stuck with one bed for the whole year, you can get both summer and winter futons.

In summer you use a lighter, more breathable one to help your body heat flow away. And the opposite in winter – a denser and more insulating futon keeps you warm through the cold winter nights.

With incredibly humid air combined with summer temperatures up to 90F (32C), a breathable summer mattress can be a real lifesaver.

No – I’m not meaning ‘cool’ like a teenage anime fan… but literally.

Everyone knows that heat rises – but we often don’t think about what happens below it.

The lower you are in a room, the cooler the air will be (generally).

Sleeping closer to the floor is another way to stay cool in an otherwise roasting, sweaty summer night in Japan.

Any new homeowner is quick to bemoan the cost of a good bed. The ridiculously expensive mattress, combined with the bed frame and linen… you’re often looking at over $1,000.

Instead, floor-based futons can cost you less than $100 for the full set. It’s simple, easily available, and barely hits your budget. No wonder people often have multiple types for different season.

The other advantage here is that it makes for better parties!

When we have friends over in the west, they often need to share our bed, or crash anywhere from the couch to the bathtub. In Japan, it’s super easy to have friends stay over – and is a much more common occurrence. When you have a whole set of spare beds you can just roll out of the closet, it’s a lot easier (and more comfortable) for friends to just stay the night.

Much of Asia experiences strong earthquakes, and Japan is no exception.

That’s why they have some of the best earthquake-protected buildings in the world. They’ve been at the forefront of mitigating the damage from these colossal forces of nature.

Inside these actual buildings, it’s always a good idea to have everything stored securely.

It’s also much better to be closer to the floor in the event of an earthquake. While this isn’t the #1 reason Japanese people sleep on the floor, it’s definitely a small advantage.

What Are The Benefits to Japanese Sleeping

We’ve all heard about sleeping on the floor potentially being the ‘cure’ to a bad back..

Mostly told by that one crazy friend who’s constantly into new fads! Though they are correct, sometimes sleeping on the floor can help a bad back. It’s essentially like a very, very firm mattress.

Well, we’re not talking about sleeping on the floor in the literal sense. While Japanese are sleeping closer to the floor, they’re still sleeping futons – similar to mattresses.

However, there are key differences.

Futons are typically much firmer than mattresses, which CAN be very beneficial for your back. The problem with modern beds is that they are often way too soft. They can sag in the middle, which leaves our lower backs unsupported – meaning we are placing our weight on them throughout the night.

Alternatively, a firmer mattress won’t sag. It will support your lower back, giving it a time to recover and regain it’s strength. So, in this way, sleeping on these style of futons is better for you than super soft mattress. But the same effect could be gained by sleeping on a firmer mattress (or a good memory foam one).

In short – the health benefits of sleeping on futons like this aren’t life-changing. They can be, if you sleep on a bad mattress, but otherwise this is more of a tradition / cultural custom than a health-focused decision for Japanese people.

Are There Drawbacks to Sleeping on the Floor?

As with anything, there’s always a few cons to match the pros.

Here’s a quick rundown of what the Japanese are missing out on:

How Do Japanese Beds Work?

As with anything Japanese, there’s a whole little system when it comes to sleeping.

First you have the Tatami mats – which we covered before. The soft mats traditionally made out of straw, and used as flooring.

On top of those you place two futons. The first is a dense, heavy futon used as a firmer foundation to sleep on. Second is a thinner foam futon – the one on which you actually sleep. Both of these are covered with their own sheets, combined with a traditional pillow – filled with buckwheat hulls rather than feathers! (Yes, they’re as noisy as they sound).

What About When They Want A Nap?

This is another big difference between western and eastern cultures.

(And one that I particularly love).

In Japan, naps are done wherever, whenever you want to take them.

It’s not uncommon to see workers asleep at their desk, or regular people asleep on park benches.

Especially when it comes to work – the Japanese see naps as a positive thing. To them, a nap signifies that you have been working so hard you’re exhausted!

Unfortunately, most of the bosses I’ve had wouldn’t see it that way..

After plenty of research, that about covers everything I could find on why Japanese people sleep on the floor.

I hope this has helped clear the topic up for you!

In the end, I wouldn’t throw away a decent mattress just yet. But maybe it’s something to consider trying in the future. And why not, it’s not like it’s expensive 😉

If this article’s helped you, please consider checking out some of my other articles below. It really helps support the blog!

Do you find yourself counting down the minutes until bedtime? If so, then you're not alone. Sleep is one of the most common sources of anxiety for people in today's world. The National Sleep...

Hi there, and welcome to our quick guide on why sleep is overrated. If this is your first time on this blog, I should say I’m a huge fan of sleep. I cherish it, research it, and of course I...

I've always felt a massive difference after a good night's rest. There's no better feeling of having the abundance of energy, optimism, and calm that being well-rested gives you. However, getting that perfect sleep isn't always easy.

That's why I've created this website. I spend tons of time reading and researching about sleep, so I wanted to share what I learned. Although I'm no expert, I hope by sharing what I've learned I can help others rest easy, too.

Thank you for visiting. I hope you enjoy the read!